by Tracey Merworth from the the San Pasquale The Kitchen Saint - St. Luke's Episcopal Church in La Union, NM 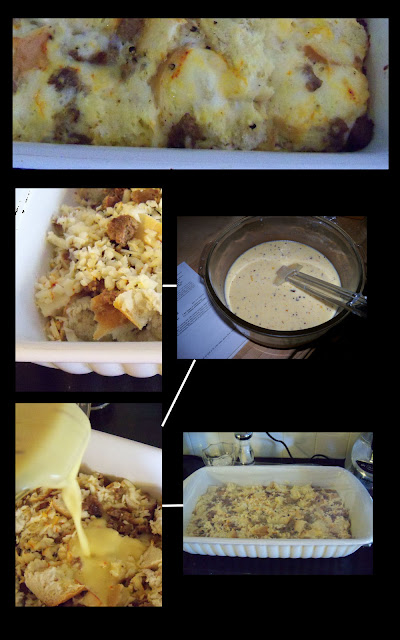 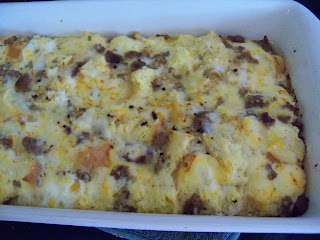 INGREDIENTS:
10 Sausage patties (Gunnoes sausage is the best here in central VA)
3-4 cups French bread, firm day-old, cubed
2 cups muenster cheese
10 Eggs
2 cups milk
1/2 tsp. dry mustard
1 large shallot, minced
1 large garlic clove, minced
1/2 tsp. cayenne pepper
1/2 tsp. kosher salt
Cracked pepper to taste
Brown sausage in skillet and drain.  Arrange cubes in 9" x 13" oven proof dish.  Evenly distribute cooked sausage over bread.  Sprinkle with cheese.  Beat together remaining ingredients and pour evenly over bread, cheese and sausage.  Cover and chill overnight.  Preheat oven to 350 degrees.  Cover and bake casserole for about 45 minutes (take cover off last 10 minutes) until eggs are and and lightly browned on top.  DO NOT OVERBAKE.
We cooked a brunch for grandma this morning and took it over to her house and enjoyed it together.  This is my first time I ever cooked a breakfast casserole.  I had to think of something to take for all of us to eat and cooking sausage, eggs, toast separately to transport didn't sound like a good idea so I looked for a breakfast casserole recipe in a church cookbook my BFF gave me for my birthday and there it was.....just the one I was looking for.    I did tweak it a bit.  The onions and garlic I sauteed and then added them to the egg custard before pouring it over the bread.  I like my onions carmelized and my garlic soft and not crunchy when biting into them.  I also made some sweet rolls (thanks to Pillsbury), took some coffee and some orange juice.  There's plenty of leftovers so we left some for grandma and brought the rest back home.
Posted by mzzbev at 4:07 PM 0 comments Links to this post
Email ThisBlogThis!Share to TwitterShare to FacebookShare to Pinterest 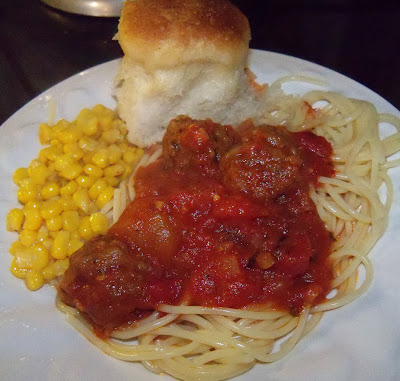 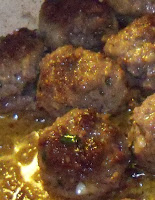 Put all ingredients in a medium bowl.  Use your own hands to mix all the ingredients together until well blended.  Take a tablespoon use it to scoop up the meat mixture and with your own palms roll and form a ball.  Set aside until you make around 20 -24 meatballs.  Heat 2 tbsps. olive oil in dutch oven.  Gently place meatballs in the hot oil, cook for about 10 minutes making sure to turn the meatballs over  every few minutes making sure they get cooked on all sides.  When all the meatballs are cooked, take them out of the pot with a slotted spoon and place on a layer of paper towels to drain.  Save meat drippings in the pot.

In the mean time start the spaghetti according to package directions. 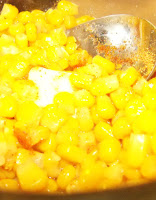 In the meat drippings, heat 2 tbsps. olive oil and cook onions.  Stir often and cook onions until transparent and carmelized.   Pour both cans of diced tomatoes and whole tomatoes and the jar of marinara sauce into the pot and stir until well mixed.  Add the wine and pepper flakes.  Stir well and then simmer for 15 minutes.  (Don't forget to check on the spaghetti).  Add the the meatballs to the sauce, stir well and  simmer for another 30 minutes.


Serve over a bed of hot spaghetti.

I've been so in the mood for spaghetti. I also had my hubby take out some bread dough ahead of time so that it would be ready for me to bake by the time I got home from work.  So, during lunch today I looked for a recipe from the Pioneer Woman and sure enough, she had one :)  I read the recipe, went home and whipped up what I had.  I didn't follow her recipe to the t only because I didn't have everything.  Well, I did get carried away with the red pepper flakes, so much to the point that I added a lot more than I should have - even Elise's eyes popped out when she saw how much I poured into the sauce.  Well, I went back to the recipe to see again how much Pioneer Woman was asking for and sure enough, her picture of her adding the flakes to the sauce was a lot more than what her recipe asked for.  I went back to scoop some flakes out and it was too late, Elise had already stirred the pot not knowing I was going to scoop some flakes out.  Oh well!!!  Hence, "That'sa one-a esspicy ehmeatball-a!!!!  Woohoo!!  It definitely had a kick but it was very good and I'm taking some for my lunch tomorrow to work :)    This Spaghetti with Meatballs was served with Buttered Sweet Corn and Buttered Garlic Rolls
Posted by mzzbev at 9:19 PM 0 comments Links to this post
Email ThisBlogThis!Share to TwitterShare to FacebookShare to Pinterest 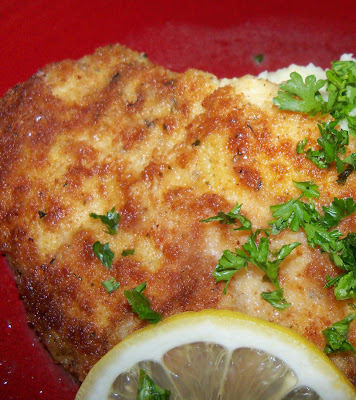 by Ina Garten cooked by Elise


Preheat the oven to 400 degrees.  Line a sheet pan with parchment paper.  Place each chicken breast between 2 sheets of parchment paper or plastic wrap and pound it out to 1/4 inch thick.  Sprinkle both sides with salt and pepper.  Mix the flour, 1 tsp. salt, and 1/2 tsp. pepper on a shallow plate.  In a second plate, beat the eggs and 1 tbsp. water together.  Place the bread crumbs on a third plate.  Dip each chicken breast first in the flour, shake off the excess, and then dip in the egg and bread-crumb mixtures.  Heat 2 tbsps.  olive oil in a large saute pan over medium to medium-low heat.  Add 2 chicken breasts and cook for2 minutes on each side, until browned.  Place them on the sheet pan while you cook the rest of the chicken.  Heat more olive oil in the saute pan and cook the second 2 chicken breasts.  Place them on the same sheet pan and allow them to bake for 5 to 10 minutes while you make the sauce.  For the sauce, wipe out the saute pan with a dry paper towel.  On medium heat, melt 1 tbsp. of the butter and then add the lemon juice, white wine, the reserved lemon halves, 1/2 tsp. salt, and 1/4 tsp. pepper.  Boil over high heat until reduced by half, about 2 minutes.  Off the heat, add the remaining 2 tbsps. of butter and swirl to combine.  Discard the lemon halves.  Serve one chicken breast on each plate, spoon on the sauce, andserve with sliced lemon and a sprinkling of fresh parsley.
Dad and I were very, very satisfied with this dish.  The lemon woke up our taste buds but not in a sour way but in a very savory way like nothing I've ever tasted before.  Dad said he could eat this every day.  We're thinking it would also taste good in a sandwich!! m-m-m-m-m-m  Kudos to Elise!!!  Great job!!!
Posted by mzzbev at 9:31 PM 1 comments Links to this post
Email ThisBlogThis!Share to TwitterShare to FacebookShare to Pinterest 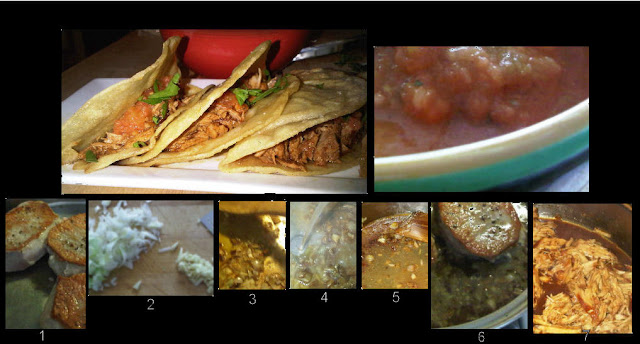 improvise - to make, provide, or arrange from whatever materials (or ingredients) are readily available (click on image to view larger image)
I saw this recipe in Elise's Williams-Sonoma cookbook and it jumped out at my tastebuds ~ I just had to make it.  Problem was, I kinda had the ingredients.....kinda-sorta, hence the definition of the word "improvise" which I had to do a lot of.  Results were just as good short of maravilloso!!
CARNITAS
by Williams-Sonoma Essentials of Slow Cooking*
Ingredients:
In a small bowl, combine 2 tsps. salt and 1 tsp. pepper.  Season the pork roast generously with the mixture.  Set aside.
In a large frying pan over medium-high heat, warm the olive oil.  (1) Add the pork, and cook, turning frequently until browned on all sides, about 10 minutes.  Remove from the pan and set aside.
Pour off all but a thin layer of fat in the pan.  (2-3) Add the onion and garlic and saute until they begin to soften, 1-2 minutes.  (4-5) Add the beer (or broth) and deglaze the pan, scraping up the browned bits on the bottom of the pan with a wooden spoon.
(5) Transfer pork back to pan with the onions and broth, lemon and orange zest along with their juices.  Also add the oregano.  Simmer for about 1/2 hr. to .45 minutes and let most of it evaporate down to nothing but don't let it burn.  Add two cups of water or more broth if there's any left, stir browned  bits again and continue to simmer the pork for another hour until meat is tender and half of broth has evaporated.
(6) Take two forks and pull apart the pork and shred it all, cover and set aside.
In a large skillet (I used my large flat iron skillet which I LOOOOVE) pour 2 tbsps. olive oil, heat on med-high.  Brown tortillas on both sides and fold over in 1/2 - taco style.  Place on paper towels to drain excess oil and set aside.
FRESH TOMATO SALSA
Ingredients:
DIRECTIONS:
Start with chopping up 2 medium sized fresh tomatoes.  Prepare the chilies.  Be very careful while handling these hot peppers.  If you can, avoid touching them with your hands.  Use a fork to cut up the chilies over a small plate, or use a paper towel to protect your hands.  Wash your hand thoroughly with soap and hot wather after handling and avoid touching your eyes for several hours.
Combine all of the ingredients in a medium size bowl.  Taste.  If the chilies make the salsa too hot, add some more chopped tomato.  Add cumin for added taste.
Let set for an hour for the flavors to combine (or as some chefs say, "marry").
Take folded tortillas, stuff with shredded pork meat, add the salsa and cilantro and enjoy!!
I didn't take any pictures while I made the salsa.  Don't ask me why but it could of been because I was a little excited but stressed to use my brand new Cuisinart Food Processor. for the very first time.  I've been wanting one for the longest time so Elise gave it to me as a late birthday present and an early Mother's Day present.  But I promise, I did make the salsa, with the help of my new food processor but I really wish I could've taken pictures.  Anyways, maybe because it was so easy, I made it in a matter of minutes.  Anyway, this is the BEST salsa I've ever made ~ not too oniony or garlicky with just the right kick ~  Delicioso!!
Posted by mzzbev at 6:02 PM 0 comments Links to this post
Email ThisBlogThis!Share to TwitterShare to FacebookShare to Pinterest
Newer Posts Older Posts Home
Subscribe to: Posts (Atom)

mzzbev
Welcome! God has blessed me over and abundantly. I'm a Christian, wife, mother, and grandmother. I enjoy crafting, painting and cooking. I love cooking it BIG on the weekends, I enjoy and love watching sports with my family and when both can be achieved at the same time we're one big happy bunch! Hence, I savor the weekend.

Proud to be a Blog Sister